Gigabyte may not have the same kudos as Dell or HP in the server market, but it does offer a good range of affordable if more basic servers. Broadberry's latest Gigabyte-designed CyberServe XE5-R280 2U rack server is nonetheless one of the first to be based around Intel's new Xeon E5-2600 v4 'Broadwell-EP' processors and we've got an exclusive look at it.

Designed for two-socket systems, the new Xeons are a 'tick' in Intel's server CPU development cycle and have more cores than the previous generation. The top-end 2.2GHz E5-2699 v4 Xeon, for example, has 22 cores and a stonking great 55MB L3 cache.

The family is suited to a wide range of business applications and, with 21 server models to choose, you can pick the right ones for your workload. Along with a fab drop to 14nm, Intel has added a heap of performance enhancements including 2,400MHz DDR4 memory support, advanced virtualisation capabilities, memory bandwidth monitoring, accelerated AES encryption and much more.

To showcase the new Xeons, Broadberry chose Gigabyte's R280-A3C 2U rack chassis and MD90-FS0 motherboard. It's a good combination as this partnership offers high memory and storage capacity plus big expansion potential and it's certified to support the high-performance 160W E5-2687W v4 Xeon.Â

The chassis is well-made with the twelve hot-swap LFF drive bays linked up to a SAS3 backplane with integral SAS expander. Behind this is a bank of four cold-swap cooling fans underneath a separate removable panel.

The motherboard is easily reached by removing the rear panel and we found access to all key components was unhindered. Although the MD90-FS0 board was originally launched for the E5-2600 v3 Xeons, it just needed a BIOS upgrade to support the v4 E5 Xeons as the new processors are simple drop-in upgrades. 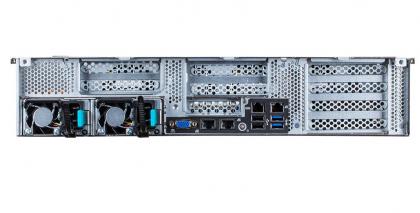 The CyberServe can't be faulted for storage features â€“ our review specification includes a great package for the price. We asked for it to be supplied with Windows Server 2012 R2 and Broadberry loaded it on a quartet of 800GB Toshiba SAS3 eMLC SSDs configured in a RAID-10 array.Â

OS performance won't be a concern as these SSDs are fast. Running Iometer with 4KB transfer requests, we recorded high random read and write throughputs of 140,000 and 38,000 IOPS respectively.

The price also includes a big data repository comprising four 6TB Toshiba SAS3 LFF drives configured in a RAID5 array. This is very generous as street prices are around Â£4,400 for all eight drives whereas Broadberry is charging nearly Â£500 less for this configuration.

The drives are managed by an Intel RS3DC080 SAS3 PCI-Express card cabled directly to the drive backplane. Along with support for all the usual RAID suspects including RAID6, it comes as standard with 1GB of 1,866MHz ECC DDR3 cache and the price includes the optional battery backup unit. 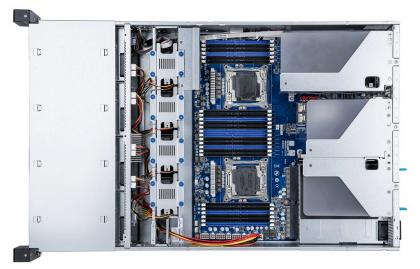 Broadberry supplied the CyberServe with two 2.4GHz E5-2640 v4 Xeons for a total of 20 physical cores. Although the motherboard supports 2,400MHz DDR4 memory, these CPUs max out at 2,133MHz and have a top QPI speed of 8.0GT/sec.Â

Broadberry has kept a keen eye on costs but still managed to include 128GB of 2,133MHz 1.2V DDR4 RAM. With 24 DIMM slots available, memory can be expanded to 768GB, and if you can afford 64GB LR-DIMMs, this can be pushed to an app busting 1.5TB.

The server includes dual 800W Platinum rated hot-plug PSUs and we barely stressed them. We measured the server drawing 167W in idle and peaking at only 310W when handling the load of our benchmarks. 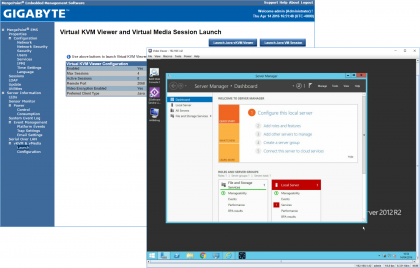 Expansion potential is impressive as the server has three riser cards giving you a total of eight PCI-Express slots with six supporting full-height, full-length cards. There's more - below the central riser is a mezzanine slot on the motherboard for which Gigabyte offers dual-port 10GbE and Infiniband cards.Â

You'll need a screwdriver to get at them all though, as Gigabyte doesn't yet appreciate the benefits of HP's and Dell's simple tool-less server designs. We also found the mezzanine slot difficult to access as the riser card above it must be removed at the same time.

For remote server management, the motherboard's Aspeed AST2400 BMC chip provides plenty of information about critical components along with full OS remote control tools and direct access to BIOS upgrades. The server's cooling fans were emitting a noisy 72dB on the 'Energy Saving' mode but we used the BMC console to manually slow them down to 57dB and keep a close eye on CPU temperatures at the same time. 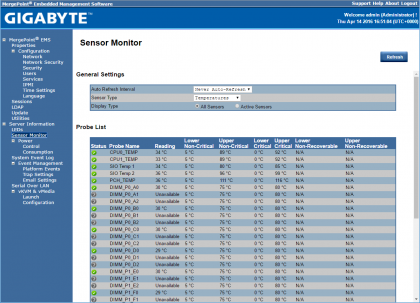 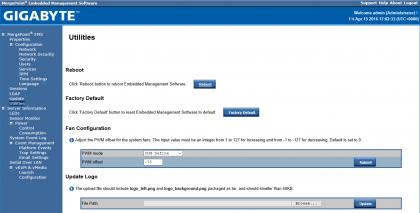 During testing, we had to tweak the cooling fan speeds to reduce noise levels

Gigabyte's monitoring tool amalgamates information from the BMCs on multiple servers into a single console. This provides plenty of operational data and access to power controls, but it looks very rough and could be much better designed. 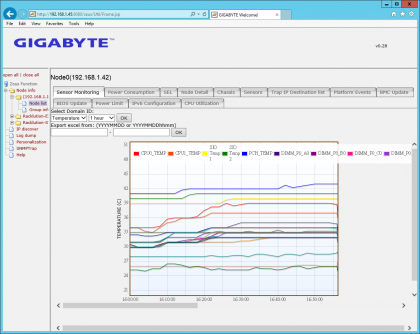 This all-Gigabyte rack server has a couple of rough edges, but nonetheless scores highly for its blistering performance, fast SAS3 storage and plentiful expansion options. It's a great value server. 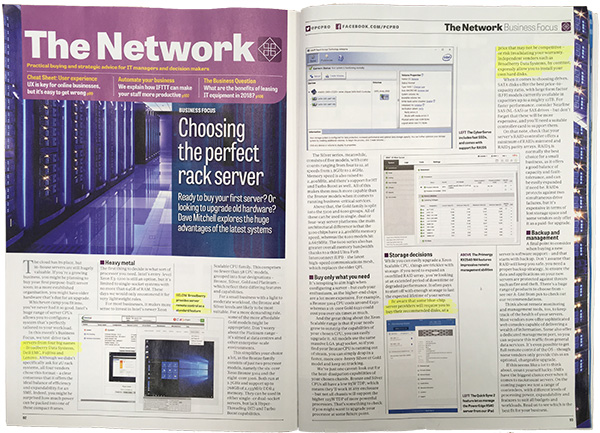